One of the best things about Redux is the flexibility it provides through middleware. Redux middleware performs it's work between when an action is dispatched and the moment it reaches the reducer. It is useful when dealing with asynchronous events like network requests or logging. In this respect, you can find tons of feature specific middleware out there. On the other hand, some middleware focuses on coding patterns which may help you adopt a more consistent coding style.

In this example, I have created a simple todos app, that is loosely based on the one in Redux's documentation. I have made changes to the file structure slightly, added constants, some error handling, and light styling with Bootstrap. However, the focus of this post will be on three popular middleware:

All of these have excellent documentation, so I won't go into every detail of how they are used. Instead I'd like to focus on some of the high-level details around how they are composed in the store, the differences in how you create them, and finally how they get called. Based on the latest npm trends, all are on the upswing other than a few seasonal dips.

Note To keep this simple, I have put my action creators, constants, and store all in a config folder. I have also included all middleware in the reducers folder. 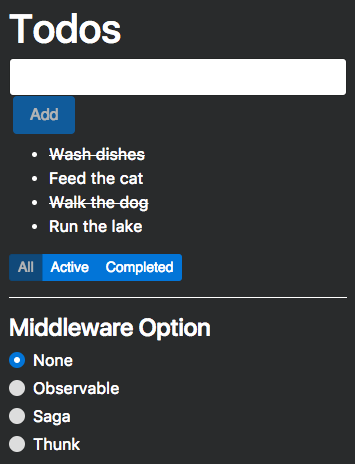 What sets redux-observable apart from the other two is that it is meant to be used with RxJS. RxJS uses a declarative coding pattern and is based on data streams and propagation of change. This means it works exceptionally well for things like AJAX, auto-complete, drag and drop, form debouncing, and web sockets, among others. It can also implicitly cancel streams declaratively which makes it more expressive and allows for less boilerplate code.

redux-observable middleware is implemented using an "epic", which is defined as a function that takes a stream of actions and returns a stream of actions. These allow you to chain operators which are especially useful for filtering, tranformations, and projection.

redux-saga is used in conjunction with the JavaScript Generator feature which provides a new syntax for creating iterables and has some very nice patterns for workflow and asynchronous code.

redux-thunk implement thunks that simply uses the concept of currying which involves functions returning functions, which can then be called. (redux-curry would have been such a great name) 😀 It works very well and is widely used with JavaScript promises in mind.

A Digression: You can always adjust how terse your code is. Just remember to be mindful of readability and debugging.

Using an index is an easy way to combine all our reducers, epics, and sagas, which allows us to have a single access point for our store. We could include this all in our store, but I prefer separating them out. Thunks are not included here as they are called independently. redux-observable provides a combineReducers function and we also use redux's combineReducers function.

In order integrate epics and sagas, you will need to create them first, so they can be applied here in the store. Since the individual thunks are called independently, we only need to apply the thunk middleware here. There are a few other differences on how each respective middleware is wired up here which I have outlined below.

Side Note: I tend to write fairly terse code, but with the store I really like breaking it down more explicitly. Finding the right balance between readability and conciseness ever the challenge.

This almost purely a presentation component, with the exception of componentDidMount to wire up the initial data. Alternatively, you could wire this up in App.js or create an additional container component.

Hopefully this give you a good starting point to using redux-observable, redux-saga, and redux-thunk in your own projects. They provide some excellent patterns and abstraction for managing state in your applications. You can get more details by checking out the source code or live link.

Note: There is no persistence layer set up, so todos will be the same when refreshing or changing middleware.